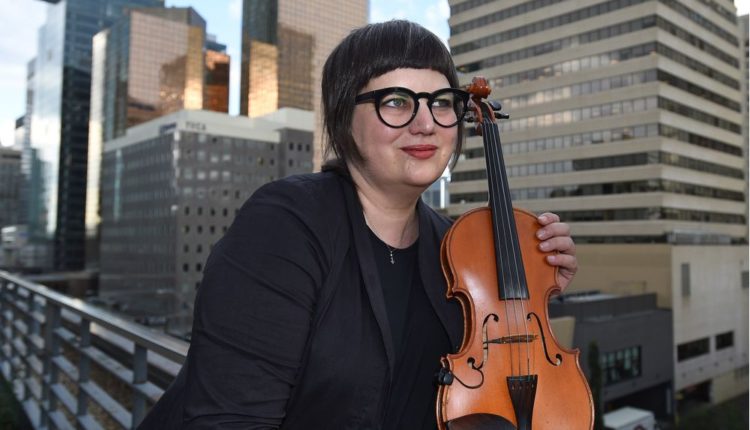 “In Conversation” with Tanya Kalmanovitch

“The thing about artistic practice is that you can’t fake it. You can’t fake your body being on stage; it’s irreducible. I’ve come to really appreciate embodied forms of practice – the transaction that happens between a performer and an audience member – as a form of radical truth-telling and truth-making.”

Please give us some background about yourself and your socially-engaged practice.

I primarily identify as a violist. Because it has a relatively limited repertoire, it almost demands that you find your own voice, which is how I found my way carving out a really unique path in improvised music. In terms of my scholarship, I have a funny journey in and out of music – it’s sort of a through-line throughout my life.

After my undergraduate degree at the Juilliard School, I had a pretty radical pivot where I went back home to my native Alberta, Canada and quit playing and started a second undergraduate degree in psychology, and then a Master’s degree in theoretical psychology. Then I moved back into playing, and in trying to reconcile the relationship between these two fairly disparate fields of practice, I ended up doing a PhD in Ethnomusicology.

It hasn’t always been clear to me about how any of these disparate pursuits were connected until relatively recently, when I started to see that the thing that connects all of them is understanding a process of inquiry and thinking about how we might defamiliarize the habitual or the taken-for-granted.

How have your multiple fields of inquiry taken you out of the classroom as creative work?

The thing about artistic practice is that you can’t fake it. You can’t fake your body being on stage; it’s irreducible. I’ve come to really appreciate embodied forms of practice – the transaction that happens between a performer and an audience member – as a form of radical truth-telling and truth-making. That’s what I’m trying to explore with the Tar Sands Songbook project.

It started with a point of realization. I was appearing on a panel for the Tishman Environment and Design Center and had this moment of total dislocation where I realized everyone was talking about Keystone XL Pipeline, and it just clicked that oil from the Keystone pipeline was coming from Fort McMurray, the little town where I was born and sought to escape by being a musician. It was an electric moment of circle completion to realize that things I thought had been separate, like the remote northern towns, and one of the capitals of the world, a career as an artist/intellectual and a child of rural poverty, that these things could all and do all exist in my story.

The Tar Sands Songbook is, in short, an attempt to really reconcile scholarship and artistic expression by using all of the tools of social sciences research that I’ve done; archival research, historical research, ethnographic research, and folding all of that into a live performance event instead of a paper or a book. It’s also my way of saying that I was aware of the climate impacts of fossil fuels certainly by the time I was 14 years old.

One of the big takeaways that I’ve had around my work is that if you want to change the world, you have to start with yourself. There is no need to travel halfway around the world to find impressive-sounding projects when the projects are within two blocks, on the corner, or within you. Maybe that kind of radical redirection of inquiry gave the possibility of uniting my social practice with my artistic practice in a much more authentic way.

I think that’s what has always troubled me: when is social justice a box that you tick or an orientation that you choose or a brand, and when is it a box you never had a choice to tick because the inequities have always been a part of your experience.

What are ways you infuse social justice into your pedagogy with students?

If you think about it, what we have historically called a university music department isn’t really a music department; it’s a white music department. In a lot of institutions you have a “School of Music” which serves classical music, and then a school of “Jazz”. Classical music gets to be “Music”, and jazz is jazz.  So, there’s a logic of whiteness that assumes that European art music has a hold authoritatively over what we understand to be music, and then any other form of music is a subset or subdivision which needs these nominative devices to give it its place in relationship to whiteness. I think this is one of the great challenges that art institutions are facing right now – how to reimagine their relationship to a very troubling legacy of white supremacy. That’s why I’m inspired by the new curricular developments underway at the College of Performing Arts.

There’s a difference between artistic practice and the art market, so I try to teach young musicians at Mannes how to navigate the relationship between the self and the developing self as an artist, versus how they come into relationship with the art market.

Art music typically talks about virtuosity in terms of technical mastery, speed, how much you can control the instrument, how difficult the kinds of repertoires you can play are – which usually is just code for various forms of power. The challenge that students have is: how do I write a bio that makes me sound really impressive when I’m still in school, still developing?

The usual way that we express power in a bio is through references to external forms of authority. “I’m an important musician because I study with an important teacher, who works at an important school in an important city. I play works by important composers in important halls.” All of which tells us absolutely nothing about who you are and why you play the kinds of music you do, where you’ve come from and how you understand your place in this world. This is dark, but, narratives about music’s power are often narratives about privilege. This notion of talent, this notion of merit, of the music market being a meritocracy is something that needs to be critically examined.

I’m also well aware that students come into my classes having invested steeply in their training. So it’s a delicate game between opening up spaces for thought and inquiry and analysis, but not wanting to dash people’s hopes. But at the same time, I feel I need to give them the critical tools they need to build resilience. I view providing students professional development, self-advocacy skills, and literacy in the issues our profession is facing as a form of social action in and of itself.

I end up relying on a lot of reflexive practice. A lot of asking people to read, reflect, think and identify as best they can their own personal location, and understand how that might come to impact the possibilities they see for themselves and the value they claim to bring to the world.

What are some lessons you’ve learned along the way as you’ve lived the balance of scholarship and artistic practice?

One is to vanquish or deal with shame. “Am I good enough to be a musician? Do I have a good enough idea to make a difference? Do I belong at this table? Could I be considered eligible for this job or this award?” The shame that comes with racism, with classism, with sexism, is one of the great impeders of value in the world.

Another piece would be learning to think about scalability. Not just in the sense of a minimum viable product, but what would my ideas look like if I could imagine myself as being somebody who received $1.2 million a year? That’s another form of practical imagination. To really not be defined by professional norms or the funding market or the art market and to have the courage to speak those things aloud to allow others to find you.

My mother grew up on a subsistence farm, without electricity or running water. She had eight brothers and sisters. They often didn’t have enough to eat. She and her sister call it “Five Os Poor”. That’s always been a 20th century mystery to me; how did people go from being born in that situation to sitting here right now. A valorizing musical narrative would say: it’s your talent that got you there. You were discovered. You were lucky. You found the viola, or the viola found you and you have this luminous talent. And so you get plucked from the sticks and brought to the city.

I actually see it in a much more pragmatic way, and I also see a lot of the limitations of those narratives. That informs how I think about social impact and social entrepreneurship initiatives, and anything that aims to deal with enhancing social mobility or dealing with poverty. I’m not always interested in the big impact story. I’m interested in what came before and what comes after.

Feminist Avant-garde Poetics – “In Conversation” with Jennifer Firestone and…

“In Conversation” with Shana Agid