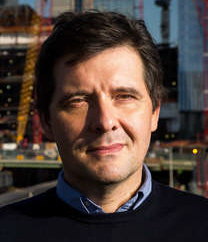 Trebor Scholz is a scholar-activist and Associate Professor for Culture & Media at The New School in New York City. His book Uber-Worked and Underpaid. How Workers Are Disrupting the Digital Economy (Polity, 2016) develops an analysis of the challenges posed by digital labor and introduces the concept of platform cooperativism as a way of joining the peer-to-peer and co-op movements with online labor markets while insisting on communal ownership and democratic governance. His next book will focus on the prospects of the cooperative online economy. His edited volumes include Digital Labor: The Internet as Playground and Factory (Routledge, 2013), and Ours to Hack and to Own: Platform Cooperativism. A New Vision for the Future of Work and a Fairer Internet (eds. with Nathan Schneider, OR Books, 2016). In 2009, Scholz started to convene the influential digital labor conferences at The New School. Today, he frequently presents on the future of work, solidarity, and the Internet to media scholars, cooperativists, lawyers, activists, designers, developers, union leaders, and policymakers worldwide. Scholz is a member of the Barcelona Advisory Council on Technological Sovereignty. His articles and ideas have appeared in The Nation, The Chronicle of Higher Education, Le Monde, and The Washington Post.