The framework from Figure 1 is the designed process of the pilot program. The bottom portion labeled “Infrastructure” is the transdisciplinary application in the design. The “User Experience” is the exchange between students and educator. In a human-centered approach, the community involved is leading and helping educate me how to design and facilitate. The framework was drafted and then updated as each workshop progressed, to be able to capture the process and feedback updates of the work co-created.

I often celebrate the coming together of people with food. I kicked off the workshop series with music and food, and it was well received. The exercise was a quick five second sensorial sprints by drawing familiar animals. It served as a warm-up to practice working with constraints and quick thinking. As for the activity “Dichos y Refranes,” or also known as proverbs, was developed from my ethnographic research. The purpose was to activate dialogue for collective stories through proverbs. Latinx communities use proverbs across generations as a way to communicate ideas, learnings, and thoughts. The first part of the activity, participants wrote their favorite proverbs to share stories of the first time the proverb was introduced to them. The second part was to break the proverbs apart like a dice game, similar to the Cuban game cubilete. The game was aimed to consider new narratives for their future through writing and drawing.

The feedback I quickly received was that the exercise is “just what the doctor ordered.” A comment referencing the state of flow participants agree they entered. As for the activity, the community rallied around the concept; there seemed to be potential to expand on this activity. 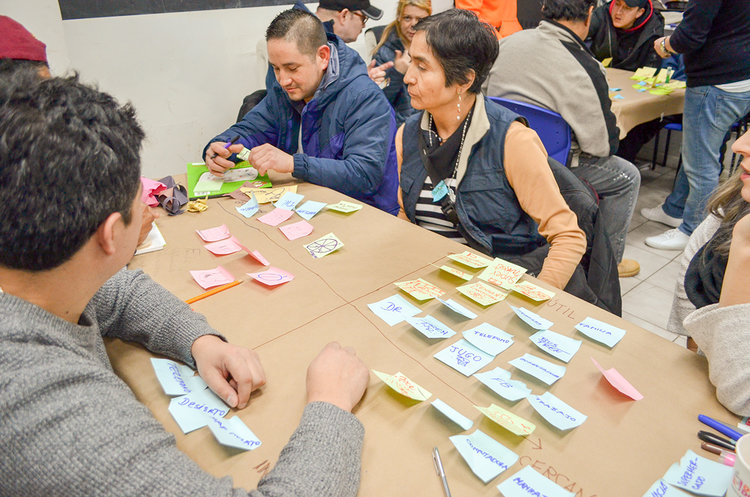 With so much excitement from the previous workshop, I was hoping to accomplish many activities, but time went by too quickly. I was not able to carry out the homework assignment. Only a few participants were able to complete the assignment. The two tasks I was able to accomplish was system mapping and introducing the class to my transdisciplinary colleague Oliver Arellano’s project about mobile phone journaling for immigrants.

For the system map activity, participants were asked to write on stickies the agencies, organizations, or individuals that impact them routinely. On a 2×2 grid, we were able to document what was useful and accessible. The process required exposure of their personal life, and it caused some people to leave from the workshop. After some resistance of participating, physical spaces to the development of the maps and the addition allowed for a more natural take to the activity. After identifying the spaces, members were asked to create abstract origami figures to complement their categories.

As for my colleague Oliver Arellano’s project, he presented a project proposal to the participants regarding the documentation of an immigrant’s journey. One without surveillance, but would be accessible to family in case of emergency. The project prompted an uncomfortable, yet needed, conversation about immigrant’s life after they pass away. What happens to the digital narrative they have developed on social media? Who can continue to access the information? Living far from their native land, what happens to their belongings if no one is there to respond to them?

I had a visceral experience of people telling me no with their eyes when it came to this system mapping activity. It was then, when I realized the lack of transparency I was showing. Exposing people’s independent life to contribute to a collective, was potentially hindering the trust that I was building. A week later, a few participants that initiated the cohort let me know they would no longer be part of the workshops without explanation. In turn, those that did stay for the entire workshop understood that artists could bring in the much-needed conversations about politics and complex issues. It was a moment of building trust with some and breaking trust with others.

The fluidness and busy demand of late night thinking began to ignite the outcomes of the thesis project. Synthesizing the map, I was able to conclude the main direction the Jornalero’s were navigating towards were places of liberation. I thought the map would supply a pattern of information to support the collective, but instead, the map reflected nodes of self-actualization.

More Members of the community approached me about their independent initiatives. They had projects on hold that needed direction and they felt I was able to support the development of their process. The projects they proposed had a profound relationship the problems of the Latinx diaspora. The specific issues they wanted to address were:

5) information clinic to report the grim disappearance of immigrants to their families.

Each issue Jornaleros wanted to address, came with project proposals that hinted a design

intervention. I helped them initiate them, but l didn’t continue developing them with them. Instead, I turned to my transdisciplinary colleague Amanda Astorga to help continue the

conversations associated with sex and health. 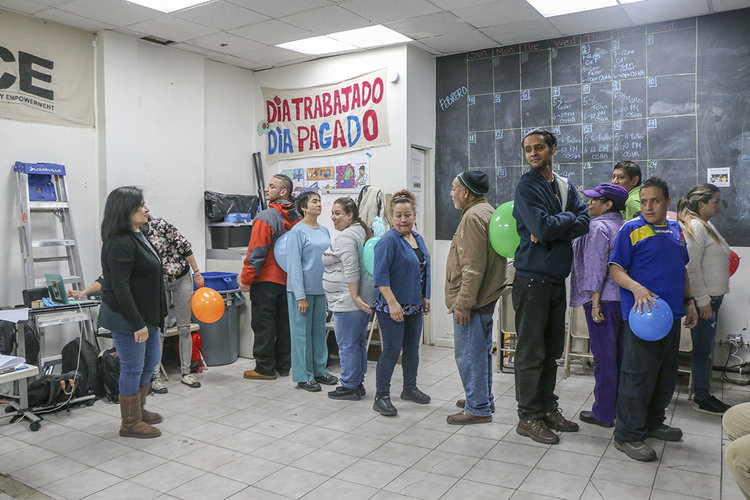 In the third workshop, Yadira de la Riva visited the community to introduce a part of her craft. Her art is in theatre performance and developed a workshop that integrated youthful playing and problem-solving. The participants exercised and performed activities centered around identity, culture, and labor. Aspects of her work are in alignment with Augusto Boal’s Theatre of the Oppressed. Activities performed were:

3) performing a counter-narrative of the Jornalero image.

The Jornalero community and I are in debt for her contribution. Everyone left smiling and exhausted in the work they co-created.

The embodied experience was much needed. One of the members said, “I didn’t want to be here at first. I was tired. I’m glad I came. I can’t stop smiling.” It was true. I witnessed the participants’ attitudes transform throughout the workshop into a positive fun experience. It was a pivot point in my thesis project because I abandoned what I had planned for the entire workshop to support the work of de la Riva. 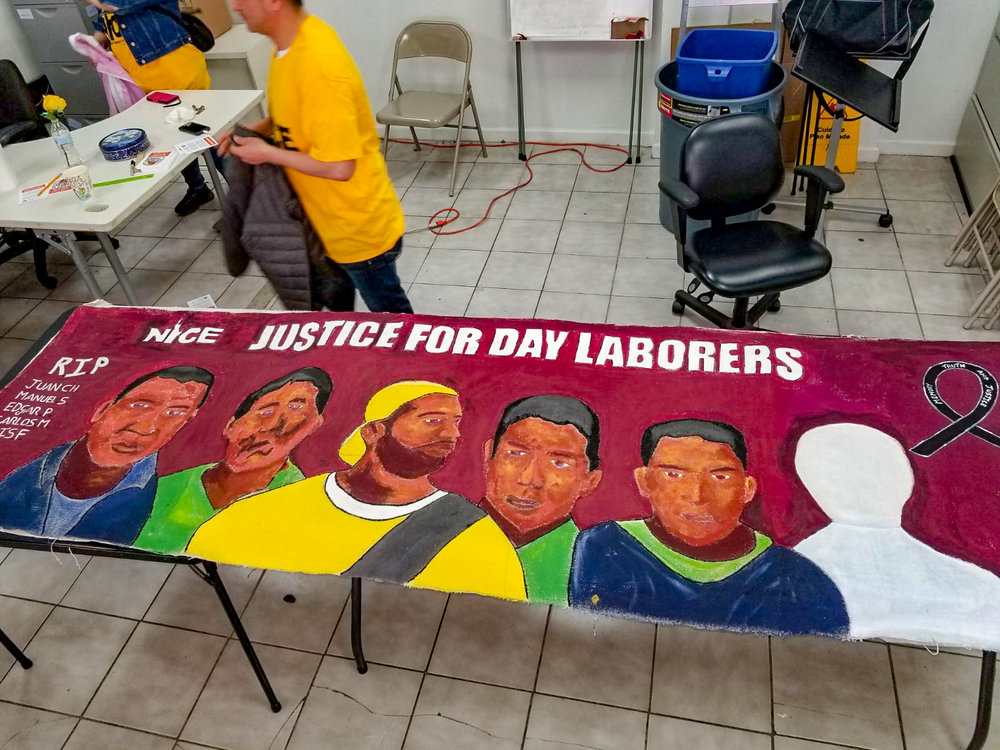 The initial plan of the fourth workshop was to put into production an idea stemmed from the original defined problem. By now, I had already lost the defined problem and had abandoned or left out many activities. I considered facilitating a prototype activity, but the Jornalero community had different interests. They reminded me that there pressing issues were in regards to wage theft and labor rights. The annual May Day event was coming, and the Jornalero’s wanted to represent themselves at the protest rally at Washington Square Park as one voice. Therefore, we turned our momentum into two more workshops than previously anticipated. The Jornalero community requested to screen print shirts with the NICE logo and develop a painted banner to celebrate the lives of the people who have recently passed as day laborers.

The fourth workshop was an important one. The purpose of the pilot program was called to question. The community reminded me what the real purpose and message was behind the practice art-making. The community voiced that art was essential to their work to communicate their unified voice. Members expressed their concern about nonrelated initiatives being a distraction to the work they have been doing. They requested to be supported with the momentum they had already created. It was difficult to talk about the future of the pilot program until the needs of the community were met. Well, May Day came, and the Jornalero’s were able to represent themselves as one voice.