What I have found is that there are two factors that are essential to the success of Morrinho. Through induction based off of much of the conversations that I had while in Rio de Janeiro I realized that Morrinho as a living art and a living response Morrinho relies on: the resources to rebuild and maintain Morrinho and that requires artisanal experience, supplies (bricks, paint, brushes, etc.) The process of maintaining Morrinho requires careful hands so the organization depends on experienced artists showing up and repairing damages with new materials. The second factor is visibility, Morrinho, as a form of art, requires an audience, whether that audience is from within the community, from institutions in the city, or cosmopolitan artists. Sustainable partnerships are central to Morrinho. There is a large body of videos, images, literature in veneration of the project but it is not organized or compiled in any sort of accessible manner. I applied the framework used by Jovchelovitch in Underground Socialbilities to Projeto Morrinho to highlight some principles that are central to art as politics as a theme to describe the organization. 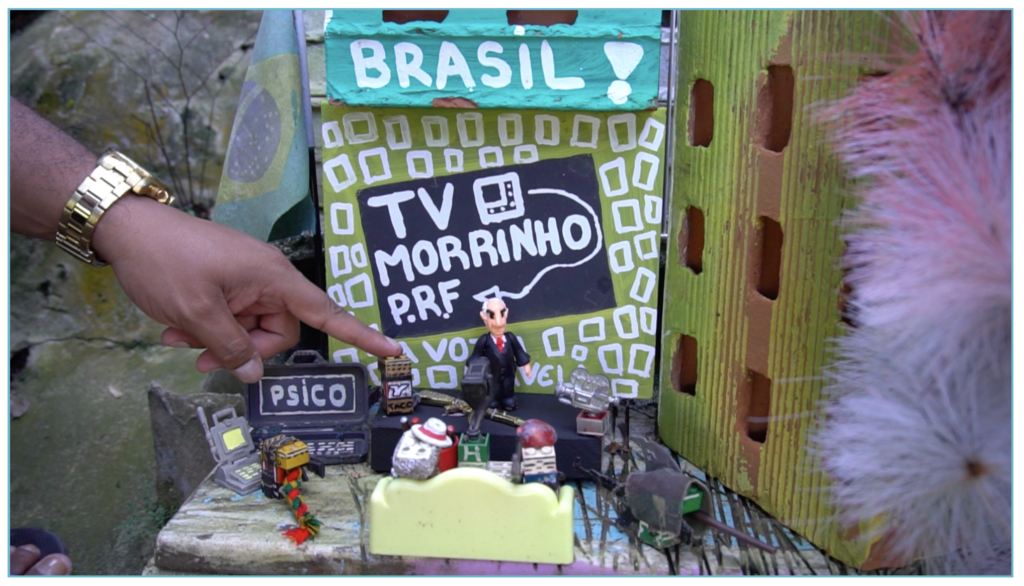 The practices of Projeto Morrinho can be organized as either outside in or inside out. There are some practices that originated uniquely out of the space of Morrinho such as the process of playing the game brincadeira, the lives of the toys within Morrinho themselves have a political claim. Each toy has a life that evolves with the progression of the game, which has very strict rules. The first day I saw them playing at Morrinho Cirlan was telling a kid that he could not fly in Morrinho without a plane or a helicopter, “no superpowers in Morrinho.” Cirlan said it is funny because sometimes they will act out a scenario in Morrinho and in the future, it will happen. Another original practice is the process through which Morrinho is built. It is a unique practice that is quite uniform, though each person adds something to the model. Other people can help to build the model, but they must either be working in collaboration, as a paid tourist, a student, and take the time to learn from the artists during about a 2-hour workshop. I categorize Morrinho Tourism as being inside out because the artists themselves act as tour guides, not some sort of third party who is not from the favela.