Rio de Janeiro is a city known for beaches and nature; samba and carnival; violence and inequality. In the past four years “a cidade maravilhosa,” the marvelous city, has hosted international events: the 2014 FIFA World Cup and the 2016 Summer Olympic Games. With a population of over six million people, Rio is the second largest city in Brazil. In the south zone of Rio from anywhere you look you see valleys of white condo buildings and decorative tucked in between the coast and towering hills covered small colorful homes and rich vegetation. The hillside communities in Rio are called favelas and they are spaces that have been discriminated against by the Brazilian state and dominant societal narratives though they are home to 22% of the population.

Favelas emerged as informal land settlements in Rio during the late nineteenth century, a period when the city was experiencing a severe shortage of low-income housing. The abolition of slavery in 1888 led to large-scale migration of former plantation workers from around the country to Rio, then, the national capital. This dynamic led to the construction of informal settlements, mainly shack dwellings built through a process of autoconstruction (autoconstrucão) where residents transformed shacks into masonry-homes (Holston 2008, 16). Residents built incrementally, stacking red, hollow, bricks in their backyard.

The barriers to inclusion in Rio de Janeiro manifest in ways that are both psychological and physical. The state has often engaged with favelas as spaces in need of increased security and as a result a police officer is the face associated with government in these spaces. Policies have reflected a deep-rooted stigma that penetrates the minds of both those who live inside and outside of these spaces. The building of walls and security efforts reflect a desire of the state to contain what they consider to be unruly masses and the aesthetic of the spaces they live. 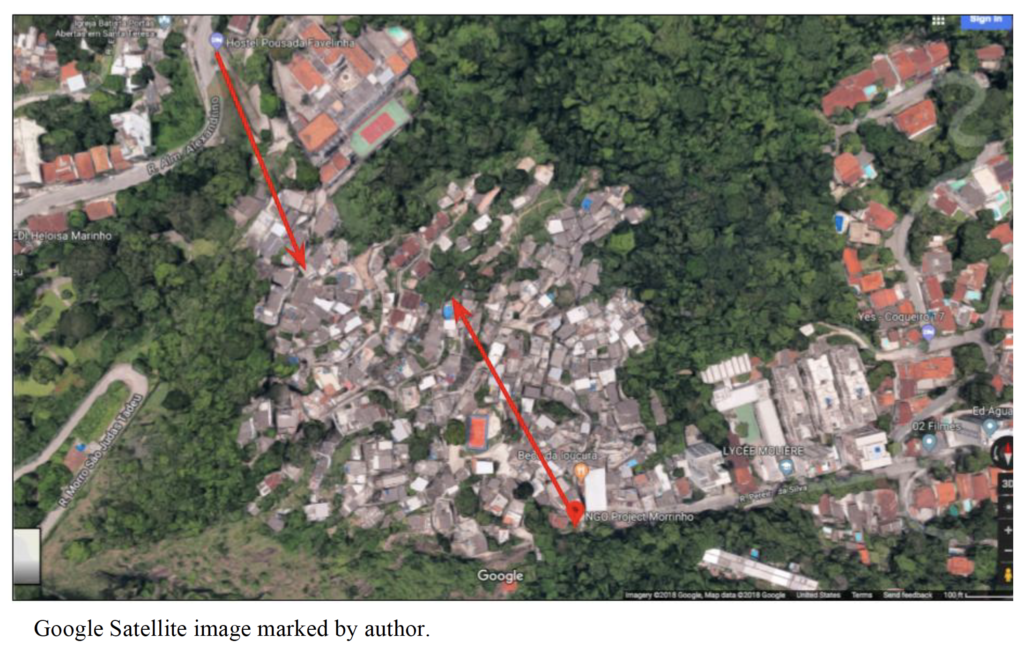 Morrinho is located in a favela called Pereira da Silva, colloquially known as Pereirão, in in the neighborhood of Laranjeiras. In a 2014 interview Cirlan said; “I think in my head that I want people to come and be impacted by the space. I don’t want them to come here and be like ‘oh that’s it?” I want them to get lost in here.” Getting lost was the first thing that I did in Morrinho. There are so many nooks to explore filled with an array of messages and trinkets. This first experience exploring Morrinho was essential to understanding the power that it can have on an individual who is in a favela for the first time, in Rio for the first time, and trying to make sense of it all through a motley crew of objects and meaning. While the students from The New School were constructing their own pieces of Morrinho, Cirlan and two youth were playing brincadera. At the core of Projeto Morrinho is the hillside on which it sits and the successive generations of youth that have contributed to its construction and its meaning. Their position as community workers evolved with the start of the project where children from Pereirão and other favelas would come to the space to play.