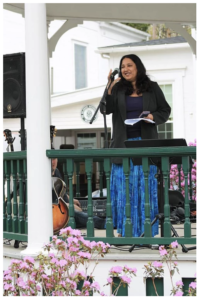 Pramilla Malick is not your typical politician. Mother of four and resident of Orange County, she is tired of watching politicians succumb to corruption.

Pramilla grew up in Scranton, Pennsylvania, her mother a public school science teacher and her father a professor of Physics at the University of Scranton; she was raised to value education and hard work.

As her children grew from toddlers to teenagers, Pramilla grew concerned about what type of world she was sending them into. She watched as dangerous gas infrastructure was brought to her community, while the quality of life and education declined.

But this mother was forced to raise the alarm when the town formulated a plan to build a compressor station half a mile away from her dream home in Minisink, Orange County in 2011.  Since then, Pramilla has been a leading voice in the struggle against hydraulic fracturing and its related infrastructure.

Pramilla has led campaigns for community rights against state and corporate seizure of private property and local natural resources.

In 2011 Pramilla led her small rural New York community to launch an unprecedented campaign against the Federal Energy Regulatory Commission (FERC), which culminated in a suit filed in the 2nd highest court in the country. This began an ongoing wave of protests against the elusive federal agency which has since changed the permitting landscape for gas infrastructure projects.

When the facility was built despite the community opposition, she organized groundbreaking citizen science to document its impacts, and change regulatory policy.  Pramilla now works with several grassroots organizations on formulating health, energy, and climate change policy on the local, state, and national level.  She has been invited to present her work to the EPA and Council on Environmental Quality along with community organizations throughout the country.

Pramilla spent much of her early life in Pennsylvania. She graduated from Scranton Preparatory School in 1982 and the University of Scranton in 1985 where she graduated with a degree in biology. She then studied Anthropology at the New School for Social Research where she met her husband, Ibrahim Malick. They have been a prominent presence in New York’s progressive community raising the awareness on a variety of issues from domestic violence to communal harmony.

Pramilla has worked with technology companies helping people gain skills and industry certifications required for meaningful careers in the IT sector.

Pramilla has pledged to focus her attention on several major issues in the 42nd district: protecting our environment, transforming our energy infrastructure to renewable energy, transitioning our economy to support “green” job creation, education, public health, safety and welfare.