DEVELOPMENT THROUGH EMPOWERMENT, ENTREPRENEURSHIP, AND DESIGN

DEED is a research lab that was founded in 2007 at The New School by faculty from design and international affairs. DEED stands for Development through Empowerment, Entrepreneurship, and Design, and seeks to understand, critique, and justly advance the indigenous artisan sector globally. We are interested in models that equally support poverty alleviation, artisan empowerment, and cultural heritage. 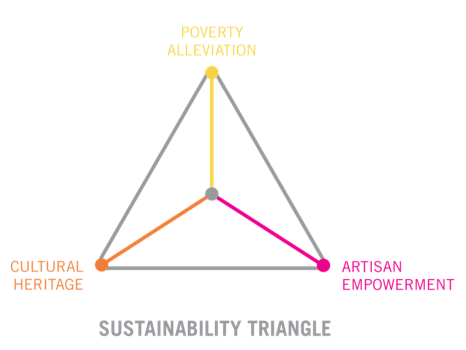 Our work started with a focus on capacity building, teaching workshops for the artisans in various areas including business, design, marketing. It’s been clear to us from the start that people usually assume design is not part of the artisans’ work, and we’ve been challenging this. In fact a lot of the companies that work with artisans tend to distinguish between the “Made by” and “Designed by”. This distinction creates a system in which their work is reduced to cheap labor and they are subject to a fluctuating and unpredictable influx of paid work, which reduces their ability to sustain a steady income for both themselves and their family.

From the many international fieldwork programs we have organized with both students and faculty from across the university, we challenge these existing models to see whether artisans can gain knowledge and learn skills that would enable them to be considered as designers. Since the lab’s founding, we’ve had almost annual field trips, with students, and faculty, to small towns mostly in Guatemala and Colombia to experience how artisans live and work, as well as how students’ skills and interests can be shared, through dynamic and immersive workshops they conduct, for the artisans to build their own capacities as social entrepreneurs. These programs are run with a commitment to mutual exchange.

Another aspect that DEED focuses on is fairness and empowerment. Are the current companies that employ artisans paying them fair wages? Do artisans gain something in addition to the income? Are they also developing as individuals? As designers? As entrepreneurs? By seeking partnerships that include NGOs, local governments, universities, existing companies and as the only academic member of the Artisan Alliance, we find ourselves in a strategic position that allows us to critique and challenge the status quo of the artisan sector today. For example, in 2014 we launched the “Fair Craft” study which started with a survey of 120 companies who employ artisans; and in 2017 began a long-term process of documenting and writing case studies of different existing business models, so we may jointly advance artisan livelihoods, and hopefully stop reinventing wheels that are not always bringing about true sustainable social impact.

With regards to our third area of interest, cultural preservation, our guiding question has been – Is it possible to preserve cultural traditions and heritage while also not preserving poverty and marginalization? Our approach here has been to consider ways that we can share the responsibility of preserving culture. We’re actively interested in the role a university should play in the goal of preservation, whether it is creating an archive of traditional works or expanding the roles of artisans from producers to teachers of their own unique craft, with the tremendous shift in income that may bring.

The artisan sector is the 2nd largest employer in emerging economies. A 32 billion dollar business. Yet, most indigenous artisans around the world are living in poverty. Many of their basics needs are not being met. There’s a lot of work to do, and it will take a massive collaborative and multidisciplinary effort in modeling what a sustainable future for indigenous artisans and their children may be.