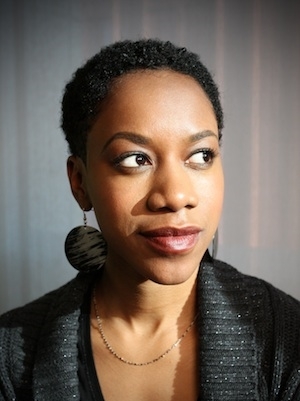 Piper Anderson, is a writer, educator, and Founder/Chief Creative Strategist at CREATE FORWARD. Create Forward is the culmination of Piper’s fifteen years engaged in cultural organizing projects activating creative strategies to end to the mass incarceration/criminalization of communities of color. Beginning in 2001, realizing the destructive impact of prisons and policing on her community, Anderson became Blackout Arts Collective’s Lyrics on Lockdown National Tour Coordinator and directed the cultural campaign that reached more than 25 U.S communities creatively catalyzing a dialogue about the impact of the prison system on communities of color. Lyrics on Lockdown has since evolved into a course at NYU’s Gallatin School, taught by Anderson, where her students design and facilitate an arts program for detained youth at Rikers Island. In 2014 the consistent success of the course catalyzed the launch of NYU’s Prison Education Program, which offers an associate degree to men at Wallkill correctional facility.  In 2014 she co-founded, SpreadMassLOVE with writer and Soros Fellow, Marlon Peterson. SpreadMassLOVE is a creative platform for the stories of people directly impacted by incarceration, criminalization, and deportation. Anderson is a skilled facilitator, curriculum designer, and cultural organizer who applies her training in applied theatre, trauma recovery, and transformative justice to end all forms of violence, generate healing, and justice. Her writings have appeared in numerous publications and books Huffington Post, ForHarriet.com, HowlRound.com and the books, Love, Race, and Liberation: Till the White Day is Done, Growing Up Girl, Seeking Wisdom, and How to Get Stupid White Men Out of Office. In recognition of her visionary leadership and dedication to applying creative practice to designing transformative social justice initiatives, Piper was awarded a TED Residency. In the spring 2016 she will be apart of the inaugural class of TED Residents and develop a TED Talk about her work.