The following body of work is the story of Otis Johnson and was written and photographed by Kari Bjorn. It is part of the States of Incarceration’s first exhibit in New York; “Rikers Island: NY 11370: In Plain Sight” which asks the question “How do you see Rikers Island?”.

Otis Johnson was born on July 17th, 1945 in Atlanta, Georgia. His birth certificate states that his parents are Leroy Edgar Johnson and Ruby Lee Dooly of caucasian skin color — that is not true. 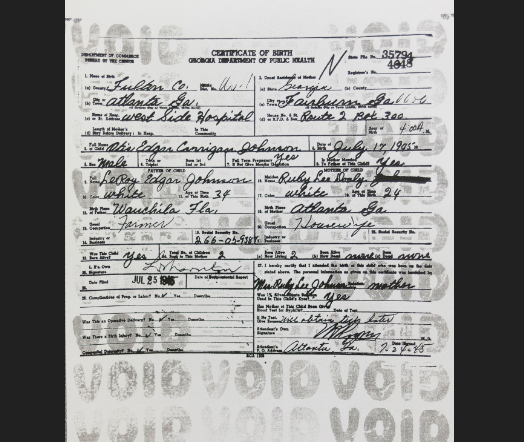 His parents, Otis William Johnson and Kattie Johnson had no other resource but to ask the people she nannied to sign as his parents so she could receive proper hospital care.

They moved to New Jersey when Otis was five years old and in his teens he would often get in trouble for standing up to bullies. His father sent him to live with monks in Hong Kong to learn self-discipline and martial arts. He spent the better part of the next 11 years there and those years would shape his personality and attitude towards life for good.

He moved to Harlem, New York, a few years after returning home from Hong Kong. His sister had gotten in trouble with drug dealers and he went to help.

On May 5th, 1975 at 12:35pm Otis was arrested by Detective Moran on the corner of 121st street and Mt. Morris Park West on suspicion of firing a gun. Later, Detective Moran reports that Otis had illegal narcotics in his pocket. He was wearing his martial arts outfit and a tan jacket.

At 11:58am on the corner of 119th and 7th avenue (now Adam Clayton Powell Jr. blvd) an anonymous call is made to 911 reporting a man in the hallway, possibly armed and selling drugs, the anonymous person describes the person as a man in a beige coat. A few minutes later, officers Morgan and Ahrens respond to the call and proceed to arrest an unknown man on the stoop of the building. As they are making the arrest shots are fired in the area, the officers look away and the unknown person uses the opportunity — grabs a gun from his pocket and shoots officer Ahrens and escapes. Records show that this incident is not reported until Otis is handcuffed in Detective Moran’s vehicle.

Detective Moran hears the call that an officer has been shot and reports that he might have the suspect in custody. Officer Morgan identifies Otis through the police car window as the man who shot Officer Ahrens. He is driven to the 28th precinct where more narcotics are reported found in Otis’ pockets.

Detective Moran obviously hadn’t searched Otis well enough. When asked for his name Otis gives his muslim name; Salladeen to the officers: “He thinks he’s some sort of Arab, we’re not going to call him that. Your name is James!” Another officer joins in and says: “yeah, throw William in there too.” — “James Williams, yes”

Officer Ahrens survives the shooting but is hospitalized for weeks.

Two days later, the police find a 22 caliber gun in a basement that is reported to have been on the “escape route”. The gun does not have any fingerprints on it and Otis is denied a request to have his hands and jacket searched for gunpowder residue.

According to a ballistics expert the bullet that pierced Officer Ahrens jacket came from a 22 caliber pistol. The police never explained why the basement was of interest to them, no search warrant was issued, according to court documents.

While hospitalized, Officer Ahrens gets a visit from the District Attorney and the Police, they brought nine pictures to identify the shooter. 2 pictures show a man in a beige coat the rest show men wearing something else. One is Otis in a tan leather jacket and the other is wearing one made of cotton. Officer Ahrens identifies the man in the tan leather jacket as the shooter. Otis’ lawyer is not present during the photo line up.

During the beginning of the trial, a 14 year old boy named Anthony Gideon reveals he can prove Otis wasn’t the shooter. He doesn’t testify. Otis believes he was pressured by the police, young Anthony tells his mother later on and she makes him testify. During Anthony’s testimony, the judge excuses the witness and asks him to leave the courtroom along with an order to the jury to disregard all of Gideon’s testimony.

Otis´ lawyer fails him repeatedly during the trial, he never reaches out to the person who called 911 — he also doesn’t interview 3 other possible witnesses that had stepped forward and the judge had offered to both the prosecutor and defense.

At the end of the trial Otis is sentenced to 25 to life for an attempted murder on a police officer, a crime he did not commit and has never admitted to. He ends up serving 40 years under the name James Williams.

During the 40 years in prison Otis gets 2 college degrees, attends multiple seminars on self help and is able to help multiple inmates. One of these is Gary Ashby, he was his protege when they met in 1979 and are still friends today. In the early 1990´s, Otis used his business education to start a non-profit organization called HEFT. A homeless shelter opens its doors in 1996 under HEFT´s name but due to prison regulations Otis is not allowed to be the sole operator of the organization — he hands his power of attorney to a group of 4 people. They proceed to the sell the house and kick everybody on the street, move the official address of the shelter to one of the groups´ residence and continue for years to make it seem as the organization is still running and collect hundreds of thousands of dollars in salary and grants. Otis finds this out when he is released in August 2014. He has restarted HEFT since early 2015.

Otis attended 9 parole hearings regarding his release, during many of them the parole board stated that he had been a model prisoner, never been in trouble — all he had to do was to admit to the crime and he would be free. Otis never confessed — The 9th parole hearing was positive.

As he is getting ready to leave Attica Prison in upstate New York he is brought before a judge. After the meeting, two US Marshals escort Otis back to New Jersey where he has to sit in prison for 6 more months, he broke a juvenile parole in 1961. The judge in New Jersey explained to Otis: “Either do the 6 months or stay the maximum 2 years and try to fight it.”

6 months later in August 2014 Otis is finally released to New York where his parole is. He is let out on Times Square with his papers and 40 dollars. For the next hour Otis gazes at people walking past with earphones talking, “Everybody looked like a CIA agent to me”. The times had certainly changed in the past 40 years.

The first 6 months after being released Otis stays in Bellevue shelter, a place he describes is like a medium security prison. Everybody has to go through a metal detector when entering and leaving and the staff are dressed like correctional officers and sometimes act [like] ones, according to Otis.

In early 2015 Otis gets a shared room at “The Castle”which is a dual Fortune Society shelter on W 140th street, he still resides there.

During the same time he is also introduced to Exodus Transitional Community in East Harlem which helps those formerly incarcerated with job seeking, resume building and offers programs on substance abuse and anger management. Otis speaks to 16-24 year olds there regularly.

Currently, Otis is working on reopening his case, volunteering at numerous organizations, trying to restart his non-profit to open a new shelter in Harlem that will exclusively cater to those in need of single rooms.